I attended the IS presentation of Nancy Grazon and Alondra Correa. Nancy’s IS was titled “The Opportunity to Succeed: An Analysis of First-Generation, Latinx College Student Aspirations, Family Expectations, and definitions of Success,” and Alondra’s presentation was titled “Lo Bueno Y Lo Malo: A Critical Analysis of Mexican-American Machismo,” which both deals with the diasporic side of Latinx people.

Nancy’s presentation emphasized the children that have arrived in the United States and their hopes for themselves but mostly hops that have been imposed by their immigrant family members.  She emphasized how this pressure from family can have positive and negative effects, mostly at the same time.

Alondra’s presentation discussed the effects of machismo on the Mexican-American women, college educated and not. She empathized that it is not uncommon to have positive experiences with the machismo, however, more commonly was the negative experiences. Another interesting thing emphasized is how the participants were in agreement that both sexes and the different genders can be machistas.

How is Muniz giving back more than money?

Even though Muniz is giving the profits to the pickers, which is greatly needed, he is also giving them a voice. By giving the pickers this voice, they are able to allow the audience know of the harsh conditions of people that live in the favelas and work as pickers.

Is his work on some level exploitative?

It does not seem as his work is exploiting the pickers, even though it could have easily gone in that direction. He actually did lots of good for the people and bringing international attention to a  humane and environmental crisis.

How is poverty portrayed?

Poverty is a huge theme for Macabéa in Hour of the Star, not only poverty as in socioeconomic status but poverty in her spirit and her life experiences. Poverty is a major issue in most countries in the world. Having Macabéa and Rodrigo be complete opposites shows how poverty and wealth in Brazil, and any other country, have such an unequal wealth distribution. The narration of the novel coming from Rodrigo shows the audience that many people believe and understand that with wealth comes education and happiness. People always say money does not buy happiness, but it does bring financial stability, sustainability, and education. This can be seen in how Macabéa is described as only surviving on hot dogs, soda, and coffee, but Rodrigo is not surviving, but thriving.

I will be working on improving the English version of the article about the Teatro de Arena. Currently, the English version is only three sentences long. Clearly, it has a huge content gap. The three sentences only mention where the theater is, when it was established, famous people that have gone through it, and when it closed down. I will be working with the Portuguese article and trying to translate it to get most of the similar information so there can be consistency. Within the Portuguese version, there are some content gaps of more people involved than just the playwrights and directors.

The articles on topics that are from white countries have absolutely more coverage than those from non-white countries. If we are lucky, we get a decent article on an extremely famous person, place, or event. This article is important to the coverage of Brazilian history and culture because this theater has such amazing history. There were many people that have impacted the artistic culture of Brazil through this theater. It is also important for how it was shut down.

I will be using a lot of primary sources from the people that were a part of the productions that went on in the theater. I will also use secondary sources that will describe the historical importance of it as well.

In this Carnival, there was a surprise headliner. Samantha Mortner is a British woman who was one of the main dancers for the Imperio da Tijuca samba school during this year’s Carnival. Mortner has lived in Brazil since the end of her first marriage in 2006. She was working as a director for a PR firm but knew she was not made for the British weather. She is a huge lover of Brazilian culture and wore an outfit inspired by Yemanja, Goddess of the Sea. 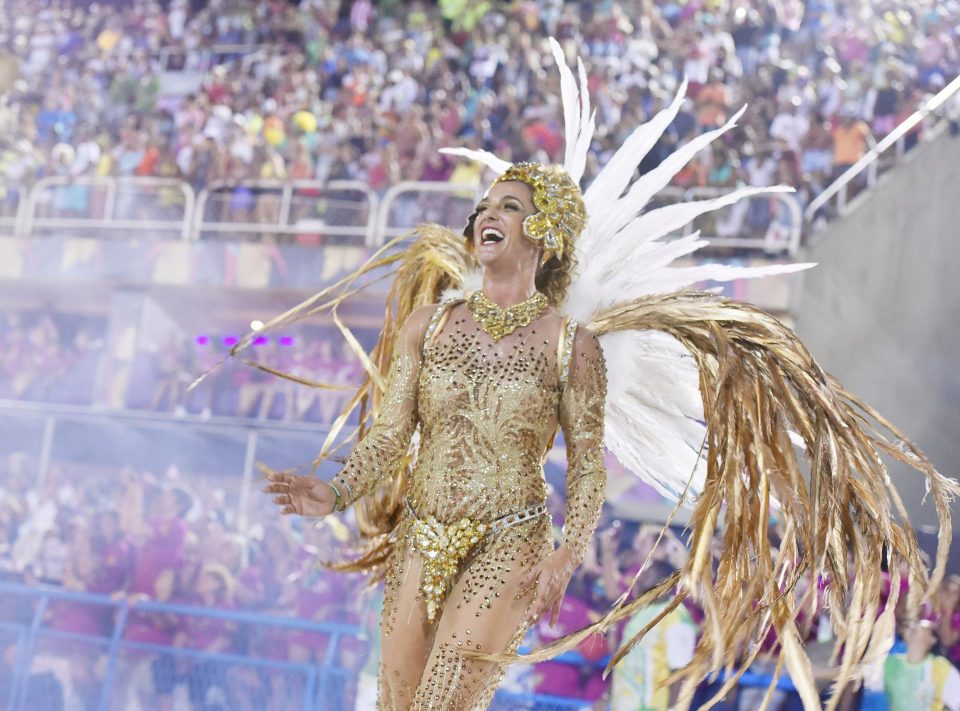 When she first came to Brazil to vacation, she knew she belonged there. She settled in one of the largest favelas in the country and started to teach the English through an NGO. Later, she got a deal with the locals; if they taught her how to samba, she would teach tourist lessons on Brazil.

Being the first non-Brazilian dancer to lead at Carnival is a huge deal. Mortner is considered the “musa gringa” in the Imperio da Tijuca samba school. This shows how welcoming Brazil is and how they want to share their culture with the entire world. Samba is extremely labor demanding and for Mortner to become a main dancer shows her dedication to the place she lives in and the appreciation of a beautiful culture.

Throughout the article it makes Mortner seem like some sort of Goddess, but that can be attributed to the news article being from the UK. However, when we discuss themes like whitewashing and cultural appreciation, it is hard to not think this is what this white woman is doing. However, the local people of the area feel as if she is coming from an appreciative stance and respect.

My research project will be about Brazilian music, especially funk and popular music. I will be looking at the whitewashing of Brazilian funk and pop music. My research question is: is there an observable relationship between colorism and race as musicians become more famous.

I believe this is historically significant because Brazil has a history of suppressing black/African music when trying to create a national identity. Now, Brazil has an observable problem, like the rest of world, the whitewashing of artist the more famous they become. Even though plastic surgery is common in Brazil, the procedures that are done on famous musicians are to give them more Eurocentric features.

Currently, my sources will be about the history of popular music and musicians for in-depth background information on the past musicians who made it big and what the popular musicians look like today. As my project continues, I will allocate more primary sources, hopefully from the artist.

His blogpost was about the upcoming presidential election in Brazil and how the two main players are on extreme opposite of the left/right political scale. This election is special because it is coming after the impeachment of the previous president and corruption charges brought against the government. The left political opponent is Da Silva and the right-wing candidate is Bolsonaro. They both want to throw out the current system, but want it replaced with something vastly different.

Class Discussion: To Be a Slave in Brazil

When talking about race in Brazil, it is important to note how the idea of race went from a biological trait to an idea that is implemented within society. In order to talk about slavery, we must know the history of sugar plantations.

Portugal set up the first plantation in Bahia in 1549. However, there were already smaller areas  and Brazil was already in the works for the African Diaspora.

Sugar is one of the most labor intensive labor jobs. it required a a hue industrial processing plant. Once you cut the cane, you only have 24 hours before it goes bad due its short shelf life. With the growing of sugar, the first crop yields the most amount of sugar, but it takes 14-18 months. The second yield takes around 8 months, but the more times it is planted and harvested the less and less sugar is yielded.

Once the canes were cut, it was a fast and harsh process to get it milled/processed as soon as possible. This time was somehow an agricultural time, but needed huge technological advancements for  the actual storing and processing. The machines have these huge wooden rollers that are fed the canes and the juice gets squished out. The rollers are wither ox or water powered. Once the juice is ll collected, the liquid needed to be boiled quickly unless it would go bad. The boiling was supposed to evaporate enough of the water so when it cools it will crystallizes.

Historian say sugar was the worst work to ever be done due to the grueling work hours and the danger that comes with it. it was common during harvest time for the slaves to be working 18 hour work days with being extremely malnourished. Working in sugar ended with many accidents. Slave were either  having their limbs cut off while cutting the cane, getting caught in-between the huge wooden rollers, or during themselves while boiling the sugar. Within the system,  slaves can work into becoming high ranking people on the plantations. Bahia had such an awful reputation for the awful conditions, planters would write guides to each other saying “Plan to replace your entire labor force every 7 years.”

When discussing historiography, we need to think about life expectancy and birth rate. With African men being more favorable, there was an imbalance in the sex in Brazil. At some point, death outpaced births. This was also due to the awful working conditions. Sugar was an economic and racist industry. It was racist because it was the whole idea that these people were disposable. Sugar was able to thrive under the idea of othering. Brazil had a different view of slavery due to the social contracts in Iberia and within the Catholic Church/Law. Portugal believed slavery wouldn’t last forever and they also believed in the equality of souls.

Schwarts’ argument was about resistance within Brazilian slavery. He makes the argument that this should not be compared to US slavery in regards to which was tougher.  He talked about the quilombous and palmares, slave fugitive communities, how militarized resistance, and cultural/religious resistance.

Everything in the article has something to do with the Indigenous people of Brazil, but that doesn’t mean all is relevant useful information for the sole Wiki page. Some of the stuff is important to the page but should be more explained on a separate page with a hyperlink and not take up too much space. Upfront the article has no biases, some may say it does if they are looking through a very euro-centric lense. There are no claims or frames that would shift the article to one way or another. The article does an okay enough job of describing what actually happened to the Native population of Brazil. No viewpoint is over or under-represented in the history. However, the contemporary Indigenous movement is extremely underrepresented. That is odd considering that the history of the Natives People is a huge part of the page (something that is said they do not know a lot about) and not something that is so easily accessible in this day and age.

The citations and links look extremely credible. Many of them go towards official government websites, scholarly books, and credible news sites. From what I can tell, most of the sites do not support or bash the article but simply provide information. As far as I can see every fact is paired with a reputable reference. The news sites are traditionally seen is unbiased, but are very centered around white people. Many people will not note this bias in many news outlets. The information seems up to date. There definitely needs to be more added to the contemporary section or a whole new page created for it.

There are many conversations on the talk page. Many other Wiki users have been conversing about changing the name to include “in” and how previous contributors have some gross prejudice towards Native People. The article is a part of the  WikiProject Indigenous peoples of the Americas and WikiProject Brazil. It has an overall C rating. We discuss this topic in a much more intersectional way.