For my Brazil history and culture post I read an article about Jair Bolsonaro, a highly controversial right wing candidate in the Brazilian presidential election. The article begins by describing a Bolsonaro rally in Roraima, a town in northern Brazil, and vividly describes the excitement and enthusiasm he inspires among his supporters. It then goes on to describe Bolsonaro’s distasteful characteristics, such as his racism, sexism and homophobia. In addition to these alarming traits, Bolsonaro’s history of supporting dictatorship over democracy is also discussed. Indeed, he publicly stated that he was “in favor of a dictatorship” during his first term in congress. The article also points out that he was convicted of inciting hate speech due to his long history of attacking women and minority groups. However, despite these glaring problems Bolsonaro is currently the front runner in the election with 18% support in polls, although he is considered unlikely to win.

Bolsonaro about to address a crowd at a campaign rally: 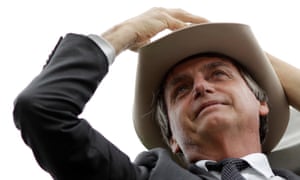 The article continues its analysis by comparing Bolsonaro to Donald Trump. It described his populism campaign pledges to promote “law and order”, be “tough on crime”, root out corruption and curb Chinese influence. In addition to similarities in political agendas the article argues that Trump and Bolsonaro share a style of speaking that is improvised, rambling, and light on facts. It goes on to say that Bolsonaro may be actively copying Trump’s strategies, which could be effective given the similarities between the United States and Brazil. The article concludes by comparing Trump’s claims of a “rigged” election to Bolsonaro’s claims that electoral fraud could take place, raising the possibility that even if he is defeated, he could undermine the legitimacy of the government.

Bolsonaro at a Campaign rally: 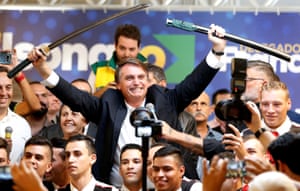 The overall portrayal of Brazil in this article is fairly neutral and unbiased, and often based on comparisons to the United States. The reader gets the impression that the United States and Brazil share important political similarities that have contributed to populist success, much as Trump and Bolsonaro themselves are similar. In general, the article focuses mostly on Bolsonaro and his similarities to Trump rather than on Brazil as a whole.

Bolsonaro’s campaign can be understood in the context of a worldwide surge in populist politics. In addition to Donald Trump’s victory in the 2016 election, populists have also become increasingly common in Europe with Brexit representing a clear populist victory. Additionally, populist parties have increased in popularity in many European countries, particularly in Germany, Italy, and France. Bolsonaro has also exploited racial and social tensions in order to motivate his voter base and promote his candidacy. His attacks on women and people of color are calculated to draw the support of a voter base that is resentful of change and wants to maintain a stranglehold on political influence. These tactics are reminiscent of Trump’s attempts to blame America’s problems on immigrants. Bolsonaro also attacks the social structure of Brazil by claiming that his opponents are spreading fake news and dismissing all of their claims as lies, thus spreading distrust and discontent and undermining the validity of objective truth. These tactics are also common among populists including Trump. In conclusion, I agree with the article’s claim that Bolsonaro is essentially using Trumpian tactics and that he poses a threat to democracy in Brazil.

link to the article: https://www.theguardian.com/world/2018/apr/19/jair-bolsonaro-brazil-presidential-candidate-trump-parallels